The Latest News on the Mitel and RingCentral Partnership

This meant organizations who use Mitel MiCloud Connect would transition to RingCentral’s Message Video Phone™ (MVP®) platform upon the expiration of their contracts. But perhaps the most exciting component of the partnership pertained to Mitel’s millions of on-premise PBX phone system customers. RingCentral would adopt Mitel’s CloudLink technology, enabling Mitel’s PBX phone systems to integrate with RingCentral MVP. This brings us to the latest development in the Mitel RingCentral partnership.

Mitel’s flagship business IP phones are now certified for RingCentral’s flagship UCaaS platform, MVP. In only six months from the announcement of the partnership, Mitel and RingCentral have reached a major milestone in the future of business communications. But more importantly, people can now fully leverage an industry-leading business phone system with a best-in-class UCaaS service.1

The series represents a suite of VoIP business phones, including the 6920, 6930, and 6940 models, that combine the versatility and reliability of a true business phone with technology to facilitate mobile work.

MobileLink, a feature of the 6900 Series, enables users to integrate a mobile phone with their IP phone using Bluetooth. 6900 users can synchronize their mobile contact list, answer mobile phone calls with their desk phones, and transfer calls between their desk and mobile phone. In addition to functionality that is critical for today’s mobile and hybrid work environments, the 6900 series offers color displays, High-Q audio, advanced functionalities, and a range of features and accessories. 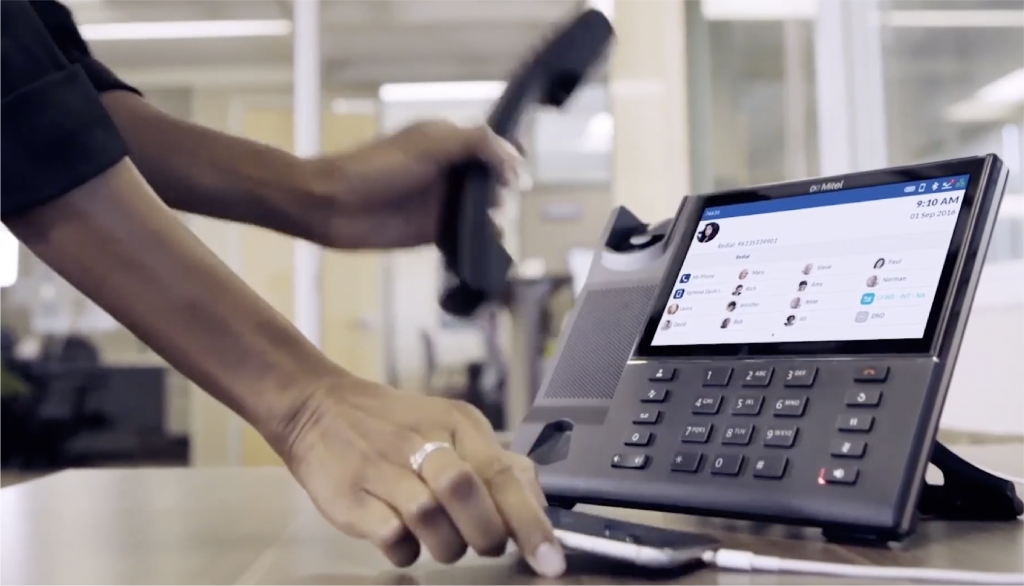 Formerly known as RingCentral Office, RingCentral MVP offers telephony, messaging, video, and other tools in one app. Here are the significant features:2

Video conferencing is an area where MVP really shines. Users can have unlimited HD video meetings with up to 200 participants per meeting. There are no device limitations, as MVP can switch seamlessly between desktop, mobile device, or even browser, with or without the app. In addition to core features like screen sharing, in-meeting chat, and meeting recording, MVP offers AI-driven capabilities like live transcription and an auto-follow feature where the camera follows the presenter in real-time.

MVP is fully integrated with nearly 40 third-party business apps, such as Microsoft Teams, Salesforce, Zendesk, Marketo, and Mailchimp.3 This eliminates the need for users to switch between platforms as they work and enables a flow of data between MVP and the third-party apps.

What the Mitel 6900 Series Certification Means for Users

Businesses that have invested in Mitel 6900 Series phones, or are considering upgrading to the series, can fully leverage their phone’s advanced capabilities with the RingCentral MVP platform. Simply put, this certification enables functionalities like call recording and analytics that go beyond the Bring Your Own Device set of features. Other advanced functionalities include:

Assisted provisioning capabilities streamline the provisioning process of Mitel 6900 Series phones with RingCentral. Provisioning is critical for both security and productivity, and this integration dramatically reduces the IT burden with a simplified process.

BLF may sound simple, but for customer support, salespeople, or anyone else working with a team over phones, it is critical for productivity. With the certification, Mitel 6900 Series users on RingCentral MVP can know who is available—or not—for a phone call at any moment and can immediately transfer a customer or prospect to their available coworker, rather than making the caller wait on hold.

For organizations that cannot provide a dedicated desk to each agent or simply prefer shared coworking spaces, hot-desking maintains both flexibility and productivity. Employees can access their extensions, profiles, voicemail, and other phone features regardless of which physical desk phone they are using.4

The good news goes beyond organizations with Mitel 6900 Series phones. Now, all existing MiCloud Connect customers can seamlessly migrate to RingCentral MVP using Mitel’s Certified Provisioning and Configuration. While this eliminates the need to manage SIP credentials, assign phones to users, and manually enter MAC information, having an expert on your side is always advantageous.

As a Mitel Platinum Partner and a RingCentral Premier Partner, we can ensure that your business has the best of communications with the right balance of cost-efficiency.