Wi-Fi’s Role in the IoT 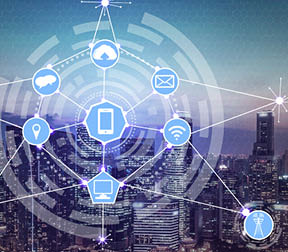 The Internet of Things (IoT) is enabling an economic transformation that may eventually rival the Industrial Revolution. PricewaterhouseCoopers analysts say the IoT will soon become a multi-trillion-dollar industry, and Gartner researchers predict more than half of new businesses will run on the IoT within two years.

For all these projections, widespread uptake of IoT will depend entirely on having a connectivity backbone with sufficient range, throughput, energy efficiency and security to efficiently move data from collection points to backend analytics engines. Cellular, satellite, Ethernet and RFID tags are all possible connectivity options. However, Wi-Fi has emerged as a popular choice because it is well established, well understood and relatively easy to set up and use.

“Wi-Fi is the beast of burden of data, and it is becoming more and more the definition of the Internet itself,” Edgar Figueroa, president and CEO of the Wi-Fi Alliance said during an address at the Wi-Fi Now Expo. “We do live in world of Wi-Fi. It’s here, it’s now and it’s not going anywhere.”

According to Spiceworks, 50 percent of organizations have IoT devices connected to their Wi-Fi network. However, the popular wireless communication standard does have some limitations. The IEEE’s original 802.11 Wi-Fi protocol was designed to deliver short-range connectivity for laptops and other mobile devices. It is well-established as an in-building wireless networking solution, but range and power limitations can hamper some IoT use cases.

Another challenge results from piggybacking IoT devices on the same networks and protocols that support the Internet and mobile communications. This will eventually create traffic issues. As IoT initiatives grow to include hundreds or even thousands of devices, spectrum congestion can lead to dropped connections.

Energy efficiency can be another issue with Wi-Fi. Although power consumption isn’t particularly noticeable when Wi-Fi is mostly used for Internet access, it becomes compounded at IoT scale. In fact, power consumption in the communication link is considered one of the chief limiting factors in IoT deployments due to the fact that small IoT devices often have low-capacity batteries, or they are in remote locations and cannot be charged very frequently.

The IEEE is addressing these limitations with two emerging wireless specifications — 802.11ah and 802.11ax. IEEE 802.11ah, also known as HaLow, is the first Wi-Fi standard specifically designed for IoT applications. It operates in frequency bands below 1GHz, reducing power consumption by more than 90 percent and nearly doubling the range compared to legacy Wi-Fi standards that operate in the 2.4GHz and 5GBHz space.

HaLow is not only capable of transmitting signals further, but it also provides a more robust connection in challenging environments where the ability to more easily penetrate walls or other barriers is an important consideration. Dense device deployments will also benefit from HaLow’s ability to connect thousands of devices to a single access point.

What’s in a Name?

To simplify matters, the Wi-Fi Alliance has announced it will apply new naming conventions to the IEEE standards. It will refer to 802.11ac as Wi-Fi 5 and 802.11ax as Wi-Fi 6. By using a numerical sequence that corresponds to major Wi-Fi advancements, the group hopes to reduce confusion among consumers and providers alike.

“For nearly two decades, Wi-Fi users have had to sort through technical naming conventions to determine if their devices support the latest Wi-Fi,” said Figueroa. “Wi-Fi Alliance is excited to introduce Wi-Fi 6, and present a new naming scheme to help industry and Wi-Fi users easily understand the Wi-Fi generation supported by their device or connection.”

More important, the Wi-Fi Alliance is taking steps to enhance the security of Wi-Fi networks. The group’s new WPA3 security protocol enables more robust authentication and increased cryptographic strength for IoT data. It also makes it easier to onboard IoT devices that have no keyboards or user interfaces. Users can simply scan a device’s QR code, which prompts the protocol to automatically provision the device with network access credentials.

One tech executive has called IoT “the biggest business opportunity in the history of people,” and the possibilities do seem practically limitless with use cases in healthcare, manufacturing, farming, transportation and many other industries. Gartner analysts say there are already more than 8 billion connected devices, and they predict that number will grow to more than 20 billion in the next two years. These new Wi-Fi standards are likely to play significant roles in that growth.